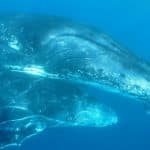 Embarkation of 8 Mégapteriens of the first hour in Mayotte for a week of observation on the whales of Moheli.

Nils Bertrand - Founder of Sea Blue Safari in Mayotte. passionate since the early hours of the association. (Www.seabluesafari.com)

Embarkation and departure from Mayotte in the early afternoon. We pass the north pass of Zamboro around 17:00 and head for Moéhli. The night is beautiful and promises a smooth navigation. A small wind crosses us quietly towards the Comoros.
For this first night of sailing, the "mountaineers", Serge and Jean-Jacques have a little wave to the soul and sail slowly.

In the early morning, we are in sight of Mohéli and, for our greatest pleasure, it is a true festival of whales which welcomes us: more than 20 whales are observed from the first hours. Nils plunges his hydrophone and we listen to the hoarse and guttural songs of several male whales also called singers.
We even make a first launch: under the direction of Nils, we swim silently towards the whale and his calf, but the visibility is not excellent and we only manage to see it when she probes.

Very early, Michel, Martine and Nils landed with a gas jerrycan (there is no petrol at the moment on Mohéli) and will cross the island by car to take care of the formalities.
On our side, we leave, accompanied by Thahomba and Macoué (two Mohéliens sailors trained by Mégaptera to observe the whales) for a big tour to the south of the islands. We head to the southwestern limit of the plateau and follow the slope. We make 8 observations. A whale and her calf even offer us a breathtaking show of jumps and "slaps" caudal (when it hits the water with its tail)
At noon we find as expected the rest of the team accompanied by the captain of the port and the head of immigration. The latter, unfriendly, want to visit the boat and inspect the cabins, accompanied by Anne or Tombo closely
At lunch, Michel tells us he saw at the back of the boat, 20 meters from the reef a whale out of the water. Everyone gorges themselves and accuses the rosé of disturbing his vision! Michel, sure of his bet 100 euros. Everyone is calm and begins to scrutinize the sea fervently. And, surprise! We see a whale and its calf appear in the indicated place. This is followed by a magical launch where 5 of us have the pleasure of seeing evolve within 2 meters of them one of these giants of the seas. For Rafael and Njara, this is a great first and they come back a little impressed but especially amazed and enthusiastic.
In the afternoon, we resume our observations. Decision is taken to head to the South East where we find many whale. At the end of the day, head full of images, we head for the anchorage located in the hollow of Ouénéfou north of Chandzi. At sunset, a wake party is organized where Nils shows a shock technique. Rafael, less experienced tries new faces, pushed by the implicit competition between the two competitors. Njara meanwhile, we dazzled by his temerity, but today it will not come out of the water, just great splash, no less impressive!

This morning, the team divides into two: there are aficionados of whales who stay on the boat and tourists who come to visit Nioumachoua and go to see the local fauna, makis and fruit bats. On our side, we embark Rénati, his son, his three daughters and his father Abada (president of the mayors of Mohéli) 82 years old. He never went to meet whales. He discovers and marvels at everything under the mocking smile of his little children.
It must be said that we had the chance to observe a whale and her calf swimming on the back and the calf opening wide mouth allowing us to clearly distinguish its small baleen. At noon we land the ancestor who tired a little and we recover our tourists, for a new afternoon of observation. The wind is up and the swell too. As a result we are heading west. We are entitled to jumps in series, beautiful. Wherever we go around Mohéli, there are always whales in quantity, all ready to make their show. In the evening, we anchor in the shelter of the swell near the waterfall, the place is magical borrowing a remarkable softness.

This morning, after a snorkeling on the fall of the waterfall, beautiful spot for coral, we head to Nioumachoua to embark. Bush and Thahomba, for a new day of observations. Bush is part of the ministerial cabinet and also deals with tourism which is potentially the greatest resource of the island. We inform him of our reservations regarding the welcome given to passing boats. The character is very interesting and we immediately notice his attachment to Moheli. He has always been out of politics, but today he is in the government and can plead the cause of ecotourism where hospitality is the foundation stone of the building. Decision is made that the boats wanting to do their formalities in Mohéli will contact directly with him so that their reception is facilitated. With a concern for transparency that will reassure boaters, it will inform them before arrival of the cost of the visa, port fees and the possibility of entering the south, much more accessible than the new port of Fomboni.
Sheikh Moussa Iboura aka BUSH
Tel Mobile: 00269 - 335 79 24 tel Home: 00269 - 772 60 32 tel office: 00 269 - 09 02 E-mail address: bushmoussa@yahoo.fr

In the evening, the sea has calmed down and we can resume our anchorage of Ouènèfou. Thahomba has certified that not far from the anchorage there were many Manta rays that frolic all year long. We are a little skeptical given the season, but we try the shot with Françoise and Daniel. So we plunge at the agreed time in the right place, but manta ray, we see no trace! The dive itself is disappointing and the landscape is ghostly 20 meters deep.

After breakfast, we disembark Said and we head to the islet n'Chaco east of the island. This rock is home to birds. On the way, we still see many whales. Then after a little snorkeling, we take our road to Mayotte. The return to square departure will be the engine (the wind is not at the rendezvous). One last observation, once we have crossed the Mohélien plateau to the east, we are no longer meeting whales, yet the sea is oil and it would have been impossible to miss them.

Thanks to Mégaptera. In addition to the pleasure of having them on board, we saw more whales in 4 days than during our life on the water. We have all experienced rare moments, for extraordinary encounters, including a particularly magical one for Rafael under the water so close so gently.
We hope that the Mohéliens welcomed on board will be the spokesmen of the actions undertaken by Mégaptera for the protection of the Marine Park. And that the result will be a productive ecotourism ....