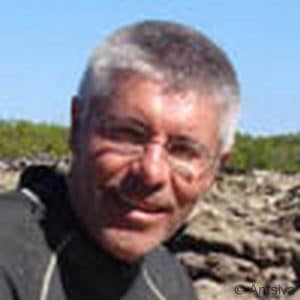 21 bird species could be observed during our journey. Five of them were only found on the high seas: the Black-bellied and White-bellied Oceans (astonishing small pelagic birds), the Tern Terns, a stealthy and distant Puffin, unidentified, and an adult of Cape-crested Albatrosses. white, very north of its usual distribution.
On Europa, the avifauna, although not very diversified (16 species noted during our stay, some of them for the first time, it seems, with reference to the literature) is however exceptional by its abundance and the nature of the behaviors observed. Most notable are the seabirds with some of the most important colonies in the Indian Ocean. The sooty Tern, omnipresent with its hundreds of thousands of individuals, creates the sound atmosphere, especially nocturnal, in Europa! Often in pairs on the high seas, they gather in impressive colonies in the south of the island to nest on the ground on low grasslands. This year, at the end of May, the terns begin to confine themselves to their future breeding sites and the aggressive and collective behaviors towards all intruders develop! The Red-footed Boobies (several thousand), remarkable for their livery is brown (majority here) or white, complete their breeding phase and all the young are now flying while the songs of the Pacific Frigates and ariel, pirates of the seas and large consumers of small marine turtles, may announce an upcoming mating phase. Prospecting relentlessly throughout the territory, they do not hesitate to really harass the crazy back fishing that end up regurgitating their prey!
Europa is also home to a large population of Phaethons, or Pailles-Tails, of two different species, both piscivorous: the red-haired Phaeton, the most robust, and the Petit Phaeton, represented here by individuals of a more modest average size. and rectrices (tail feathers) median yellow (and not white as their counterparts of other islands). The noisy Caspian Tern, with its powerful red beak, has always been seen on the beaches. The dimorphic Egret (with its 3 phases: white, slate or gray!) Animates the flats at low tide, in search of all life in puddles, associated with a procession of waders, long-distance migrants (to Siberia !): Ruddy Turnstones that begin to display their breeding plumage, Curlew with the typical arched beak and rare Leschenault Plovers still in winter livery. Note the amazing sight of a flamingo fluttering over the mangrove on May 26!
Finally, on the land side, it is necessary to emphasize the presence of a small passerine, the Zosterops or "bird-glasses", endemic of the island, abundant and present in all the mediums (grassy areas, bushes, afforestation with Euphorbia and even mangroves ), the Common Crow, an opportunistic scavenger, and the Barn Owl whose black rat is probably the favorite prey.
A whole world in short, but with a fragile balance that must be preserved absolutely!