Reef inventory and mapping in Europa 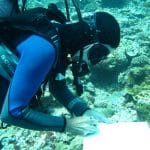 The Scattered Islands (Glorious, Juan de Nova, Europa, Bassas da India, Tromelin) are among the rare island spaces of the planet not undergoing human disturbance, their access being strictly regulated; only a few access authorizations are given to scientists as part of their research. From a scientific point of view, these islands are therefore extremely interesting to differentiate the share of direct human pressure on the changes observed in the ecosystems (eg fishing, coral trampling, coral reef wastewater) from those that act to global scale ("global change"). As a result, they are exceptional natural laboratories.

But there are many obstacles to overcome before having this great privilege to go to work in the Scattered Islands!
You first have to write a program that responds to a request, then it is retained to obtain funding and access authorizations. This has been the case for our BioReCIE program (Biodiversity, Resources and Conservation of the coral reefs of the Iles Eparses), selected following a CNRS call for tenders. This program met an expectation of the French Southern and Antarctic Lands (TAAF) which are in charge of the management of the Scattered Islands. These islands should be classified as National Marine Protected Areas (MPAs) to enhance the protection of associated ecosystems. But the establishment of MPAs imposes a management plan that requires basic knowledge of the environment and associated communities. Given the lack of knowledge about coral reefs and to meet the needs of managers, the main objectives of the BioReCIE program are 1) to complete the data acquired on reef biodiversity through inventories (Algae, Cnidarians, Crustaceans, Molluscs, Echinoderms, Fishes ) associated with habitat mapping; 2) establish a zero point for fish resources on each of the islands. This vast program, funded by several donors (INEE, INSU, IRD, AAMP, FRB) involves about thirty researchers from more than 10 institutions (IRD, University of Reunion, University of Paris VI, Museum of Natural History of Paris, Naval School of Brest, Agro Campus of Rennes, Marine Natural Reserve of Reunion, ARVAM, Pareto, Reunion Aquarium, Museum of Natural History of Stuttgart, Oceanic Research institute of Durban).

Once the program has been financed, all that remains is to compose the ideal weather forecast, availability of each other, authorizations to visit sites, medical certificates of aptitude to leave on isolated islands, diving logistics, etc. Marion Dufresnes tour in April 2011, it is Europa which constitutes the second stage of the program BioReCIE carried out this time aboard the superb sailboat Antsiva.

Thanks to Nicolas and Anne for having offered us ideal conditions aboard their sailboat (kindness, comfort of the boat, delicious food, dive logistics, ...) to carry out our research.

A big thank you to the entire team for having each one in your way allowed to finalize all that was planned in our busy schedule. We were helped by a good weather star but also by the positive waves that pushed us at the end of this great human adventure. Friendship and curiosity are the best drivers to move forward in life as in research!

Many already know Antsiva and find their marks. For others it is the discovery of a new universe.
Once the mountain of luggage is well set and stored in the hold, we sail. Since there are so many of us, some enjoy the pleasures of camping and the air mattress while others opt for the solution of the berth to 3.
Fortunately, a young lady's time accompanies us on this first crossing and Nicky and Maya can even sleep on the bridge.
After 36 hours of calm sailing, we anchored at Europa's anchorage on November 6th shortly before midnight.

First sunrise on Europa. The waves break on the flat in front of the weather station. But, we have no time to lose, part of the team must land with the equipment. This first descent to land is not easy and even causes some cold sweats. But finally, everything is going well: the shore crew will be able to set up their camp.

The crossed swells of the south and north make it particularly difficult the maneuver of the launching of the big annex. But thanks to the union of all the efforts and with the help of all the valiant arms, we manage to get off the diving boat without breakage or injury. Phew. !!!

For this first morning, we descend along the west coast and a small team will perform the first mapping.
The afternoon is devoted to formalities with the gendarme and the landing of luggage. Joseph gives us a beautiful demonstration of his docking qualities: the head under the water, but the luggage dry! This is also the moment for Chantale to get off the edge and join the team on the ground. Just arrived at the camp, she relaxes her arms with a small session of alteres ...
In the evening, everyone found their place. The team of happy earthlings, spartanly installed in the premises of the weather station: Joseph, Nicky, Chloe, Chantale, Maya and Lydiane and that of the happy sailors, comfortably cradled in the flanks of Antsiva: Plume, Patrick, Lionel, Ron , JB, Helene and Martine. For the duration of the mission, Chloé and Lydiane will play jumping sheep between the two teams: at sea for the dives, ashore for the evening work. Congratulations to both for their tenacity and their resistance.

In the morning, team work is put in place. The diving boat leaves with 6 divers while the white annex accompanies 2 apneists for the mapping points.
After lunch, Chloe and Lydiane, in charge of their collection of hydraires and algae found a pair of landladies. Meanwhile, the shore crew collected at Congres Bay. Even Chantale insisted on following this first expedition.
In the afternoon, Jean-Benoit, Plume and Lionel start mapping the mangrove while Patrick and Martine take the opportunity to drop the kayaks at the roundabout sappers and walk back on the north path.
In the evening, Maya and Lydiane are back on board to celebrate the 35 years of JB kid. Among the many gifts, the legendary turgid nipple of 'you-know-who' who seems to have fantasized more than one ...

Today, the team has planned a large exploration of the reef of the south coast, the least studied coast because the most exposed to wind and waves. As the sea conditions are not very serene, Antsiva will secure the annex of the divers and remains geostationary in a somewhat rough sea, ready to intervene in case of difficulties of the divers. These chained two dives. Unique dive, not by the biodiversity but especially by the magical meetings with schools of hammerhead sharks. Our divers come back on board, their eyes full of stars ... We return to the anchorage at the end of the afternoon, just in time for Chloe to return to her base on the ground. The earthlings spent a good part of the day collecting along the northern flats.

Today, the swell has completely crashed, the sea is oil and divers will be able to tackle the exploration of the southeast coast. Two dives are scheduled: one takes place along the south-east coast, the other at the extreme east point. Hammerhead sharks, still present, continue their show. They seem even more and more curious about the activity of scientists. On the ground, the life of the scientists and especially the work of the lab are a little disturbed by the arrival of a new military contingent.
At nightfall, a small glow moves on the beach. It is Joseph who, braving mosquito attacks, tracks nocturnal crabs and crustaceans.

This morning, Nicky, Maya and Joseph have scheduled a job in the mangrove. They arrive at the boat early because you have to juggle tide times. Nicolas, who knows the passes well must accompany them in annex, drop them to the kayaks and return to Antsiva. But, they left a little too late and at the entrance of the mangrove, Nico realizes that the tide is already too low and that it can not leave any more. It is good for a whole day in the mangrove of Europa. Not unpleasant except for the fact that he had not planned this and he is in simple underpants. To hell with modesty!
He will first guide the fine team to the resurgence to try to find seaweed and crabs particular. Then, while Nicky and Maya collect, Nicolas and Joseph go kayaking to explore the inaccessible arms, always in search of new crabs.
The whole team ends up around noon to nibble and share the few cookies that serve as their lunch, then patiently wait for the rising water that will free them from the mangrove.
Return to Antsiva around 3 pm, where fresh beers and a salvage lunch await the seasoned adventurers, thirsty and somewhat burned.

The ground crew has planned an exploration of the reef on the south coast. A long walk under the sun awaits our scientists. JB and Patrick are also part of the ballad because they want to do some mapping. The tractor and the new military contingent accompany the brave marchers.

Meanwhile, divers explore the north-east coast of the island and, during a dive, they come across the discovery of a magnificent giant Porites while large groupers move nonchalantly around them.
In the afternoon, some mapping points are made in the mangrove. We also meet the two botanists who take advantage of the unexpected presence of kayaks to inventory the plants of the mangrove.

Last sunrise on Europa. A wonderful time is coming for this final day and the team is in full activity of the day. Plume and Patrick make a final dive on one of the stations of the global coral reef monitoring network, JB a last point carto on the flat, Lionel sieves his sand samples, the team on the ground stores the equipment of the station, the crew prepares the boat for the departure and the schedules make the comings and goings. Chantal re-embarks aboard Antsiva without difficulty. She gives herself her first bath at the back of the boat and the hammerhead sharks come to greet her. Too strong Chantal!
At 17h, everything is ready for the switchgear. We leave the anchorage and watch Europa gradually fade under the fires of the setting sun.
But the melancholy is not appropriate and the evening will be under the sign of gaiety and songs. Note the performance particularly applauded JB interpreting us masterfully Armstrong, I'm not black, I'm white skin ... Bis! Even Ron gets out of his reserve and joins his voice at the party.

A smooth crossing back. Decidedly this team is lucky! We arrive at the port of Tulear around 14 hours and the team can enjoy the afternoon for a new visit to the IHSM and a small tour in town.
Last night on board. Well watered and very happy. The bastard songs compete with jokes and funny stories. Even the dwarves go to the mine ... and the first takes, what already ????

Landing in the early morning. Taxis wait on the dock and load a ton of luggage. Carrying out such a busy mission and such a large team is not the easiest and yet everything went wonderfully well. Thank you to all the team for its good mood and professionalism. And a big special thanks to Plume for giving us his trust and sharing his passion through this great adventure. We leave when you want ...