Why do turtles return to their birthplace to lay ? episode 1 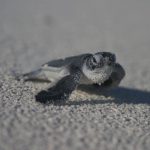 The first fortnight of May was chosen for this new mission associating the CNRS, Kélonia, Ifremer and the University of Reunion.

The purpose of this mission is to better understand the movement of turtles. Specifically, the manipulation consists of catching green turtles that have made their first egg-laying, boarding them on board Antsiva and dumping them on the high seas after having removed them at least 100 miles from their nesting grounds.
12 adult turtles will have to be caught in this way. Each will be equipped with an Argos tag that will track them via the satellite. To make things worse, in order to disrupt their sense of direction, some will be decked out with a magnetized "diadem".

That's it, the picture is set and it's gone for 14 days of adventure and more than 800 miles to go.

We also embarked on deck the dismantled boxes intended to receive the turtle during their stay on board, as well as bamboos and various materials that will be used to handle small critters that can reach 250 kgs !!

Last night was nice, not too much swell, but the lack of wind forced us to make this crossing to the engine. We anchor in front of the "landing stage" at the very first rays of the sun. And dawn making way for the day reveals the turquoise waters of this "magical" Eden
The breakfast quickly swallowed, the team is immediately at work to unload the equipment. With Tombo and Rafael, we put together the crates for the edge: a real meccano game. But already, by mounting them, we measure their fragility: the Malagasy carpenter who made us them is visibly rid of all his sapwood!
This done, we go down to attack the assembly of boxes intended for the parking of turtles on the beach, waiting for transhipment on the boat. Basically we go up a transit zone.
After having dinner very early to stall with the tide all the team goes down to the ground for the night with the mission of capturing the first turtles.

In the early morning, four turtles were captured. After much thought, the team decides that the boat will only make 2 rotations of 6 turtles (instead of 3 rotations of 4 turtles initially planned). We must capture two other turtles during the next night. In the meantime, the four turtles are parked on the beach in the crates and the team must take turns all day to monitor them, water them and prevent them from exploding their crates. Indeed, turtles feeling trapped, rush into the stretchers and show a fierce determination to escape.

The last two turtles were collected during the night. There remains the boarding maneuvers aboard Antsiva. Again, things are not easy: turtles are heavy (between 120 and 200 kgs) and show no good will to facilitate handling. After some "hiccups" of development, we find the solutions adapted to the problem. In order to avoid violent clamming, each turtle will be packaged in a sail bag. Four turtles are parked in the four crates at the front and two others occupy the annex.
At the end of the morning, the transhipment operations are completed. Lunch for everyone and departure for a point located 100 miles north west of Les Glorieuses.
The navigation is done without problem. Everything is going too well because the wind and the current push us to destination, which promises a difficult return!

We arrive at the point of letting go with the first rays of the sun and we put the boat to the cloak. The swell is felt and does not facilitate maneuvers. For the purposes of the film, two cameramen get into the water. Finally, one by one, each turtle will finally find its natural element.
To the greatest satisfaction of all!
At 11:00 the annex is boarded; we can turn around.
As we imagined, the wind and the current, favorable to the go are now against us. The sea is too formed to imagine direct to the engine. We draw more or less square edges on the way back. With the approach of the night stormy grains are announced. We all take our trouble and begin our quarters. Some team members too sick will still be dispensed, the skipper is not a monster so insensitive as that!

In the early morning, we got closer to 40 nautical miles on the 100 miles to go.
This is the moment chosen by the mainsail to tear (12 hours of work will be necessary to sew the whole thing). We balance the genoa with the engine downwind. Gradually the conditions of sea and wind soft and we opt for a direct trace to the engine. At 15:00 the loop is complete: we are back on Glorious. Just arrived, the Ifremer team jumps into the water to collect DNA samples of small reef fish (ti'jaunes and cardinals). The purpose of being to determine larval migrations within the southwestern region of the Indian Ocean. This study will ultimately determine whether it is appropriate to preserve certain areas to ensure the repopulation of reefs widely punctured by humans.
After the dinner rebelote, the 10 leave the edge and leave to hunt turtles all night long.

This morning, only 4 turtles in the beach parks. We will wait one more night before leaving for the second rotation. This follows the ¼ round for monitoring and watering turtles trapped. During the day, the turttle-men team deals with catching and ringing juvenile turtles. This is an opportunity for Romain to learn this unconventional rodeo that is to get closer to the turtle swimming in shallow waters, jump on him by blocking his forelegs. This first attempt is inconclusive: Romain returns empty-handed. The rest of the team does not fail to "mukate" the bizuth who takes it with a smile.

The night at anchor was hectic: 25 knots of wind. If the anchorage is sheltered at low tide, it is not at all at the rising tide. The swell enters and the waves can break. We skidded 500m and we had to drop 80m of chain in only 10m of water!
This morning the turtle count is good, but the sail is not ready yet. Romain tries a new rodeo and succeeds this time to catch 2 juveniles, which is worth to him the warm congratulations of all.
The days go by, the sleepless nights are cumulative, but the Kélonia / Ifremer team displays a form, an energy and a constant good mood. Hats off, gentlemen!
At 16:00 sailing has finally resumed its place and we start boarding the last 6 turtles. 9:00 pm we raise the anchor for the second rotation.

That night, the navigation went without problems. On the other hand, the turtles were agitated and destroyed two crates and tore a bag. They are as eager to find the water as we are to drive them there. Arrival on the site at 14:00. We release our captives directly from the boat, without going through the annex. As this time, there is no movie to shoot, everything is simpler, especially since we start to master the manipulation perfectly. At 15:30 we spend a great shot jet to get rid of tons of sand accumulated on the bridge. We enjoy a calm weather window for a smooth return.

Arrival at the Glorieuses at 13h00. Jerome and Hendrick go on a hunt for juveniles, but along the way, they meet sting rays and take the opportunity to dive with them and take great pictures. Stéphane, who has been here for two days, joins us for dinner and can hardly appreciate the Caïperina prepared by Hendrik.
The night looks calm and we all need rest.

This morning, Hendrik accompanied by Jerome and Rafael will recover a camera filed by a previous mission. This camera recorded 2 minutes of film every 2 hours. This study of a fixed point of the reef should give valuable information on the behavior of sedentary fish. This done, they go back to collecting fish samples. Samples that turn out to be smaller and therefore more difficult to flicker. On his side Romain wins the gallon by capturing in rodeo 4 tortoises including a male of good size. In the late afternoon, a memorable football match is organized between the military and the boat. It is a stinging defeat for scientists: 11 to 0 but the atmosphere is in good shape and everyone is around a drink well watered.

This morning we are preparing for departure. Cleaning to leave the beach clean. Exit the crates, the turtle bags etc. ...
Everyone takes the opportunity to send his mail. It should be known that the TAAF issue stamps valid only on islands scattered and obliterated by the only "policeman, postal agent" present on one of these islands: the great Glorious. When we know that to go to the said island, we need a special authorization issued with great circumspection, we can imagine in these conditions, the interest of philatelists.
Once the luggage folded, we leave for the island of Lys to find a large colony of terns. We anchor in 6 m of crystalline water.

In the night the wind got up and the anchorage is limitable we had to wet 80m of chain in only 7 m of water to finally hang. And, in the early morning, it is against the hollows of more than 2.5m that we pass the northern tip of the reef.
We send canvas and everything becomes more comfortable despite the 30 knots of winds to the meadows.
Then gradually down the wind down to the south to force us to start the engine. At night everyone takes back his ¼ and the miles parade.

In the early morning we land the team Kelonia Nosy Iranja. They have partnered with the hotel to save the turtles and come to review and tighten contacts with Ignace the turtle gentleman of the hotel.
Then we resume our journey to the crater end point of the mission.