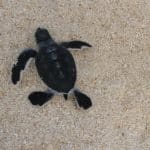 As agreed, go to Nosy Be on May 29th, the starting point of the mission.
On the program: a cabotage route between Nosy Be and Cap St André on the Malagasy coast. Then the big jump to the island of Juan de Nova, ultimate goal of the mission.

In total 10 people will participate in this journey, in the order of appearance of photos:

Sonia and Patrick (Museum of Natural History of Reunion) who will study insects.

And finally, Frank, Thierry and Guy who are responsible for capturing beautiful images and filming the mission.

Tany Kelly will be the first maritime contact with Madagascar. The Kelonia team ensures from the first day with 20 banded and sampled turtles. Even if the spot is tourist, it remains a marine reserve of excellent quality. We take lunch to visit the second site: Ankazoberaviva Island. This islet brewed by the currents is home to a small hotel and gives the opportunity to our filmmakers to interview the manager on his positions in the protection of the eco-system turtle. Arrived at night at the anchorage of the Bay of Russians, we will not have time to go on the meadows.

The second day, despite heavy rains, we have an appointment with the splendid Nosy Iranja, which, once is not custom, will have to reveal its charms under a very low sky. Kelonia has established contacts and this is the opportunity to recover the samples collected by Ignace, the "turtle sir" of the hotel. We will take off from the island just in time to get to Barahamamay. This mooring located in the mouth of a river, besides its enchanting setting, is an ideal starting point to go to meet an authentic mangrove and preserved from any human manipulation: here it is zero pollution. It is primarily a hatchery site, but it is also the preferred habitat for waders and kingfishers.

The third day will take us to the archipelago of Radama and Kalakajoro will be the first island visited. Geographically it is the highest island of the archipelago, but economically it is especially famous for its shipyards.
There are dhow and beautiful pirogues.
The island is also home to a temporary fishing village of "Dinga Dinga". They settle here for a specific period, the time for them to pick up a maximum of sea cucumbers that will then be sold (very expensive) to Chinese.
Underwater exploration will be a little disappointing.
Then, in favor of the night, equipped with powerful projectors, Sonia and Patrick tend a large white sheet on the beach to chase the insects. They return loaded with a multitude of samples.

After a last contact with the shipyard, but this time accompanied by our sailor Tombo who is in charge of the translation, we head for our second island of Radama "Antany Mora". This island is home to a small tourist unit that receives mostly big game fishermen and a village mainly living from the exploitation of sea cucumbers. The Kélonia / Ifremer team is happy to have sampled Nested Turtles and a beautiful Tortoise Chelonia midas of 105 cm carapace.

It is at 4 o'clock in the morning that we leave this beautiful island for our next stop: the bay of Moromba. Navigation a little muscular, close meadow with 30 knots of wind established. Antsiva with its own hull revives with speed. What a pleasure !
The approach at low tide and the choice of anchorage forces us to raise the keel and we cast anchor in 3m of water. We discover characteristic creeks lined with baobabs. The rocks, undermined at their base form immense jagged mushrooms.
While Sonia and Patrick run after insects and butterflies, the film crew makes contact with local sinners to accompany them in their activities the next morning. As for the Turtle team, she is searching the bay for possible nesting sites.

This morning, in the bay of Moromba, the wind blows hard and without stop and it is on this alive sea that our scientists and our cameramen will follow the fishermen of "dinga dinga" to film their daily fishing.
Loaded with images, the team arrives just in time to cover the 300 miles that separate us from Juan de Nova, our next stop. Well protected by the Malagasy coast, the boat takes off on a calm sea and with 15-16 knots of wind, we maintain a speed of 10 knots a good part of the night. In the morning, Eole will take a little rest to get back in force and in the opposite direction in the middle of the afternoon. These are ideal sea conditions where everyone takes full measure of the joy of sailing aboard Antsiva.

We trace so much that we arrive early in the afternoon. Pascal (the gendarme) Fabrice (the chef) and Cédric (his second) welcome us warmly. Once established that these are the expected people, they will go into 4 to help the team in their various tasks

During these 5 days everyone will go about their business. Charge to Antsiva to ensure logistics. A few flashes to describe this beautiful island: First of all, these beaches with turquoise water and so crystalline. These explosions of colors that one would think almost unreal at sunset. These trails (very well maintained by the military) that snake under the forests of filao.
Sonia, Patrick and the video team arrive on shore to maximize their search time. They settle in the gendarme and travel the island along, across and across to collect a maximum of samples.
Meanwhile, the Turtle team hunts on the southern part of the island. First on foot, hunting will prove much more effective from the annex. Jerome, Stéphane and Hendrick take turns to make beautiful dives and capture the turtles that will be banded and genetically removed. A total of 23 turtles will be caught.

The Video team captures images and tries to cover as many subjects as possible. From the interior of the island with its old lime farm, to hunting insects or turtles, they are everywhere and travel miles of beach, dune and trail, the camera on the shoulder.
Hendrik, who has already made several trips to Juan de Nova, tells us about a submerged wreck in the northwest of the island.
At low tide, a piece of rudder still exceeds the water and dives can be done in apnea in 6 to 8 m of water.
There is a plethora of fish and coral colonies have invaded many parts of the wreck.
Underwater observations vary according to the time and the tide. Afternoon divers have a good chance of encountering predators: sharks and big jacks or barracuda are still present in the late afternoon.
While the morning divers enjoy a higher luminosity and visibility and find only the usual inhabitants of the reef with a very rich and colorful life.

The closer the departure time is, the stronger the southerly wind. If the anchorage undergoes more and more swell, it promises a nice navigation to the Malagasy coast.
Finally, on Monday 11 all the material is re-embarked on board and we leave Juan de Nova in the early afternoon.
The wind is downwind and pushes us quickly to Cape St Andrew. We finish the engine to make an arrival at night in Mahajanga.

The next evening we will meet all around a large table of kebabs on the promenade of the sea of Mahajunga.
A sacred good atmosphere well in the image of his 15 days of common life aboard ANTSIVA.
A big thank you to everyone for these good times.